Still with William Hartnell’s first season (story four of eight) it’s back in time for an adventure in history, this story is set in a historical period and context, avoiding science fiction elements beyond establishing the plot where the Doctor and his companions have traveled to the past.   Historical stories were quite common during the first Doctor’s tenure.   The costumes and settings for these historical stories were always accurate.

Marco Polo is the first story we come accross that is missing from the BBC Archives, although in common with other missing stories, film stills and a soundtrack still exist.

The story originally ran over seven parts in 1964.  It was also the first time Doctor Who appeared on the cover of Radio Times. 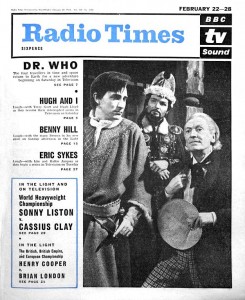 Landing in the Himalayas of Cathay in 1289, their ship badly damaged, the Tardis crew are picked up by Marco Polo’s caravan on its way along the fabled Silk Road to see the Emperor Kublai Khan.
The plot concerns The Doctor and his companions’ attempts to thwart the machinations of Tegana, who attempts to sabotage the caravan of Marco Polo along its travels through the Pamir Plateau and across the treacherous Gobi Desert, and ultimately to assassinate Kublai Khan in Peking, at the height of his imperial power.