Ooh You Are Awful ! was the big screen version of Dick Emery’s BBC TV show.  Released in 1972 when many popular comedies found their way to the cinema it starred Dick Emery as Charlie Tully, a talented conman and master of disguise.

The film is a vehicle for Dick Emery, who plays Charlie Tully by recreating familiar characters he played in his TV shows. (Their portrayal here differs by having each character be Tully “in disguise”, whereas their TV appearances showed them as separate individuals, with lives of their own.)

Before his death, Reggie Campbell Peek deposits a stolen £500,000 into a Swiss bank account. But Peek left a record of the account number: the digits are tattooed on the bottoms of four young women, none of whom know the value of their asset. His erstwhile friend and partner-in-crime Charlie Tull (talented conman and “master of disguise”) sets out to locate those women to gain sight of the digits. Meanwhile, Tully is being watched by other – more dangerous – men… 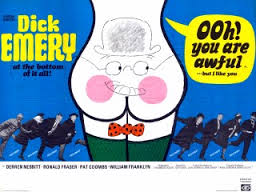