In part one we told about how the show came about, by the end the stars had become household names as the series became an overnight success.  The story continues with Part 2 taking us up to the 40th Anniversary Show in 2011.

The Comedians set out on a record breaking national tour of major theatres, including a summer season in Blackpool and a six month run at The London Palladium – the highest accolade for variety entertainers at the time.  The commercial success didn’t stop there – a live album of the program made the bestseller charts, there were Royal Galas and the series received several awards including the prestigous Critics Circle Award.

Over the years The Comedians have always been in great demand on the live circuit.  Some moved into acting alongside their careers as comics – Duggie Brown appeared in many dramas and sit-coms, Vince Earl starred as Ron Dixon in Brookside, Mike Reid played Frank Butcher, one of the most popular characters in Eastenders, Paul Shane was Ted in the comedy series Hi – De -Hi.  Some became game show hosts – Roy Walker hosted Catchphrase’ Tom O’ Connor presented Name That Tune, Jim Bowen became a cult figure with Bullseye.

There have been several documentaries made featuring The Comedians and no fewer than ten of the original team, including producer Johnnie Hamp, have been subjects for This Is Your Life.

in 1991 Hamp organised a 20th Anniversary Reunion of the original Comedians which produced a chart topping video, and yet another reunion ten years later in 2001 to celebrate the 30th Anniversary which was a sell- out at The Opera House, Blackpool.  This was followed by a successful summer season at the same venue – and later by a nationwide theatre tour.  In between there was the ITV television special -The Comedians Christmas Cracker, to celebrate the 25th Anniversary.

As part of the 40th Anniversary celebrations members of the original Comedians – Frank Carson, Stan Boardman, Jim Bowen, Mick Miller and Dougie Brown – appeared on four Fridays in August 2011 at The Grand Theatre, Blackpool in a show hosted by their legendary producer Johnnie Hamp who also paid tribute to some of the original Comedians who are no longer with us by screening video footage of Bernard Manning, George Roper, Charlie Williams etc.

The idea of bringing a group of Comedians together in one television show has been used to great effect since with shows such as Live At The Apollo and Michael McIntyre’s comedy Roadshow, but nothing will ever replace the groundbreaking pace and style that was The Comedians.

Again we owe thanks to Johnnie Hamp who provided the material for this post. 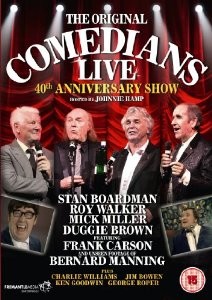