The third in the highly successful carry on series released in 1959.  It features Ted Ray in his only Carry On appearance, look out for a young Richard O’Sullivan and Larry Dann who makes his first of four Carry On Appearances here.

Pupils run amock at Maudin Street School in an attempt to hang on to their headmaster. He has applied for a new job, but the students like him and don’t want to lose him. They concoct a plan – blacken his record in front of the Ministry Inspector and then he won’t ever be able to get another job!

Kenneth Williams and Ted Ray would appear again in 1968 with David Frost.  The apparrent chemistry between the two lead them to be cast in the ill-fated radio series The Betty Witherspoon Show. 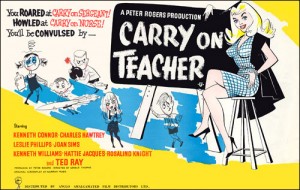