A self-confessed “jobbing actor”, John Le Mesurier will perhaps be best remembered for his role as Sergeant Wilson in the hit BBC sitcom Dad’s Army.  However Le Mesurier appeared in over 120 films, numerous stage plays and Radio series.

Despite coming across as the suave laid back gentleman John Le Mesurier did not fair as well in his personal life as his professional.

His parents were Charles Elton Halliley, a Solicitor and Amy Michelle (nee Le Mesurier), whose family were from Alderney in the Channel Islands. Both families were affluent, with histories of government service or work in the legal profession.

While John was still very young the family settled in Bury St Edmunds in West Suffolk.

Here he was sent to school: first to Grenham House in Kent, and later to Sherborne School in Dorset where one of his fellow-pupils was Alan Turing who of course would himself later find recognition for his code breaking work during World War Two.

From an early age Le Mesurier had been interested in acting and performing.  Despite his interest in acting,  on leaving school he was initially persuaded to follow his Father’s line of work, as an articled clerk at Greene & Greene, a firm of Solicitors in Bury St Edmunds.

Despite his full time job, John continued to take an interest in the arts and in his spare time he took part in local amateur dramatics.

In 1933, John Le Mesurier left the legal profession, and enrolled at the Fay Compton Studio of Dramatic Art.  Here he met another future famous actor: a fellow-student, Alec Guiness, with whom he became close friends.

In July 1934, the studio staged their annual public revue in which both Le Mesurier and Guinness both took part.  Le Mesurier received a Certificate of Fellowship, while Guinness won the Fay Compton prize.

After the revue, rather than remain at the studio for further tuition Le Mesurier opted instead to join the Edinburgh-based Millicent Ward Repertory Players, earning a salary of £3.10s (£3.50) a week.

During November to December 1939, Le Mesurier was touring Britain in a production of “Goodness How Sad”.  It was during this time he met the director’s daughter, June Melville, who became his first wife they married in April 1940.

In September, 1940 Le Mesurier was conscripted into the British Army.  He reported for basic training with the Royal Armoured Corps a few days after his rented home had been bombed by the Germans.  In June 1941 he was commissioned into the Royal Tank Regiment.   He served in Britain until 1943 when he was posted to British India, where he spent the rest of the war.

Le Mesurier later claimed that he had had “a comfortable war, with captaincy thrust upon me, before I was demobbed in 1946”.

Back To The Day Job

Upon being demobbed Le Mesurier returned to acting, initially struggling to find work again.  In 1946 he found his wife, June had become an alcoholic.  He would later comment  “She became careless about appointments and haphazard professionally”.

In 1949 the couple separated and were divorced.

In June 1947, Le Mesurier was appearing at the Player’s Theatre in London, Here he met Hattie Jacques who was among the performers.

They began to see each other regularly whilst Le Mesurier was still married, albeit estranged from his wife.

In 1949, when his divorce came through, Jacques proposed to Le Mesurier, asking him, “Don’t you think it’s about time we got married?” The couple married in November 1949  and had two sons, Robin and Kim.

In  1962 Jacques began an affair with her driver, John Schofield.  The affair took it’s toll on Le Mesurier’s health, yet he remained convinced that he could repair the damage.

After collapsing whilst on holiday in Tangier in 1963 and being hospitalised in Gibraltar he returned to London to find the situation with Hattie unchanged.

During the final stages of the breakdown of his marriage, Le Mesurier had met Joan Malin at the Establishment Club in Soho in 1963.  A year later he moved out of his marital house.  The day he left he proposed to Joan who accepted his offer.

Le Mesurier allowed Jacques to bring a divorce suit on grounds of his own infidelity, to ensure that the press blamed him for the break-up, thus avoiding any negative publicity for Jacques. 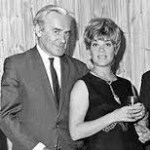 John Le Mesurier and Joan Malin were married in 1966.

Just a few months after they were married, Joan began a relationship with Tony Hancock and left Le Mesurier to move in with the comedian.

Hancock was a self-confessed alcoholic by this time and was verbally and physically abusive to Joan during their relationship.  After living with Hancock for a year his violence towards her was becoming worse.  Consequently Joan attempted suicide.  Realising she that she could no longer live with Hancock she returned home to her husband.

Unbeknown to Le Mesurier, Joan had resumed her affair with Hancock and, when the comic moved to Australia in 1968, she planned to follow him if he was able to overcome his alcoholism.  She abandoned these plans and remained with Le Mesurier after Hancock committed suicide on 25 June 1968.

Le Mesurier was a heavy drinker, but was never noticeably drunk.  In 1977 he collapsed in Australia and flew home, where he was diagnosed with cirrhosis of the liver and ordered to stop drinking.

It would be eighteen months before he drank alcohol again, even then he avoided spirits and drank only beer.  Second wife Hattie Jacques claimed that his calculated vagueness was the result of his dependence on cannabis although the actor insisted the drug was not to his taste; and that he had smoked it only during his period of abstinence from alcohol.

By 1983 John Le Mesurier’s health had visibly declined and in July the same year he was hospitalised for a short time after suffering a haemorrage.  When, in 1984, the condition recurred he was taken to Ramsgate Hospital.

His remains were cremated, and the ashes buried at the Church of St. George the Martyr, Church Hill, Ramsgate.  His epitaph reads: “John Le Mesurier. Much loved actor. Resting.” His self-penned death notice in The Times of 16th November, 1983 stated that he had “conked out” and that he “sadly misses family and friends”.

Towards the end of his life Le Mesurier wrote his autobiography, A Jobbing Actor; the book was published in 1984, after his death.

John Le Mesurier always considered himself a “jobbing actor” and will always be remembered for his role as Sergeant Wilson in Dad’s Army.  Despite this he appeared in more than 120 films , normally in smaller supporting roles alongside countless stage roles.  He appeared in both of Tony Hancock’s films The Rebel and The Punch And Judy Man.

Among his best remembered TV roles was as Colonel Maynard in the ITV sitcom George and The Dragon, in which he starred alongside Sid James and Peggy Mount.  He also appeared in episodes of Hancock’s Half Hour and alongside Arthur Lowe in the Coronation Street spin off “Pardon The Expression”.

Le Mesurier was the voice of Fred the Flourgrader in a series of Homepride Flour ads in 1964.

However it was in 1968 that Le Mesurier was offered his most famous role in a new BBC sitcom: Dad’s Army playing the upper-middle-class Sergeant Arthur Wilson.  He was actually second choice for the role after Robert Dorning.

Le Mesurier was initially unsure about taking the part as he was finishing the final series of George and the Dragon and didn’t really want another long-term television role.

He was persuaded to change his mind both by an increase in his fee—to £262 10s (£262.50) per episode.and by the casting of an old friend: Clive Dunn as Corporal Jones.

Having accepted the role Le Mesurier was initially unsure of how to portray his character, but was advised by series writer Jimmy Perry to make the part his own.  Le Mesurier did exactly this basing the character on himself.  He later wrote that “I thought, why not just be myself, use an extension of my own personality and behave rather as I had done in the army? So I always left a button or two undone, and had the sleeve of my battle dress slightly turned up. I spoke softly, issued commands as if they were invitations (the sort not likely to be accepted) and generally assumed a benign air of helplessness”. Perry later observed that “we wanted Wilson to be the voice of sanity; he has become John”