Back in March the BBC announced a season of one off remakes of popular sitcoms to mark the 60th anniversary of Hancock’s Half Hour first appearing on TV.

Shows in the season will be Porridge, Hancock’s Half Hour, Young Hyacinth, Steptoe and Son, Till Death Us Do Part, Are You Being Served? and Up Pompeii, all of which will star well known actors as the main characters, seeming the originals are no longer with us.  Recently the BBC announced that Goodnight Sweetheart would join the line up.

Kicking it all off will be a live episode of Mrs Brown’s Boys.  Whilst we are not aware of transmission dates for the others Mrs Brown will air on BBC1 on Saturday night (23rd July) at 9.45pm.  In the original press releases it was announced that the season would air accross all BBC TV channels over the summer and would kick off with Mrs Brown live on BBC1.

Titled: Mrs Brown’s Boys Live: Mammy Sutra, creator Brendan O’Carroll has admitted to nerves ahead of the popular sitcom’s live episode this Saturday.  He told the Daily Mirror  “Half of me can’t wait to get there and half of me wishes it was over.”

In the live episode which will be completely live, no filters, no 5 second delay Agnes discovers son Mark Brown (Pat ‘Pepsi’ Shields) and his wife Betty (Amanda Woods) are experiencing problems in the bedroom. She takes it upon herself to fix the situation.

Images have also been released for Young Hyacinth and Porridge 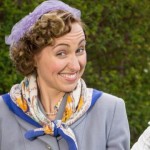