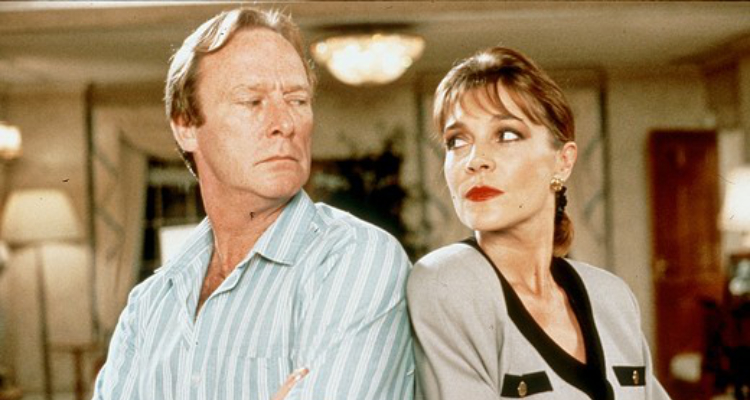 From the pen of Good Life writer Bob Larbey, came this 90’s sitcom with an all star cast.  It ran for three series and nineteen episodes.

Of course there is the customary theme tune sung by Dennis Waterman.

Meet Tony Carpenter, a self-made millionaire, who has turned his South London minicab firm into a successful chauffeur-driven car service.

Living in a large detached mansion in Esher, surrounded by Rolls Royces and BMWs, with a domestic staff who respect him and who he adores; Witty and insolent butler/driver Sam (who is also a childhood friend of Tony), acerbic secretary Maggie and cook Mrs Wembley (responsible for the series’ catch-phrase of “Just the one”, used to respond to the offer of a sherry even if it was her third or fourth).

Despite his idyllic lifestyle Tony has his problems.

His working-class background and sensibilities make him uncomfortable with the idea of having domestic staff, and in dealing with local snobs.

Nothing he does seems to please his snooty wife Ruth, who hates his downmarket behaviour, constantly suspects him of infidelity with either his secretary Maggie or friend & model Dawn (both of whom are significantly younger than herself), and cannot abide the “chummy” relationship he has with “servants”.

Then there is daughter Stephanie, away from home at a Public School and thus being inculcated with upper / middle class sensibilities, who is embarrassed by both her father’s differing outlook, and by the unsettled relationship between her parents.

Finally there is his mother, who is still living in a South London terrace, and never seems impressed with his achievements, finding herself unable to understand why he lives “all the way over there” (in reality about 14 miles or 40 minutes’ by car, or a few stops—less than 20 minutes—by train) in his big house.

All in all it all makes for some great humour.

Sadly no clips are available, we’ll keep a look out and update should the position change.