Coming off the back of the successful Hugh and I series was the follow up series: Hugh and I Spy.

Despite the success of the original series Hugh and I Spy ran for just one series of six episodes.  Like so many shows of the time episodes are presumed missing.  However in 2013 the sixth and final episode “Tea or Coffin” turned up when it was sold to a private bidder on eBay in March, 2013 it had come from actor Patrick Duffy’s private collection.

We last left Hugh and Terry on a cruise after Hugh had won £5000 on the Premium Bonds.

Whilst our heroes have returned they have found themselves unwittingly involved in the world of espionage and double-dealing.  Each episode ended in a cliff hanger.

Sadly no clips are available and we are not aware of the remaining episode being attached to any DVD release. 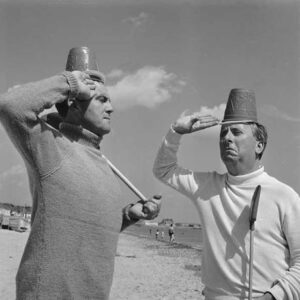