Probably best remembered for the hit TV series Terry and June, June Whitfield had a remarkable career spanning over 60 years.  She appeared in many of the biggest shows and comedies on TV.  Not only TV but on radio, stage and the big screen.

Her Father was the managing director of a company called Dictograph Telephones, a business founded by his Father in Yorkshire.

Both of June Whitfield’s parents were keen amateur actors.  June was just three years old when she made her first stage appearance, after being enrolled by her mother at Robinson’s Dance Studio.

She later moved with her parents to Huddersfield, where she learned shorthand and typing.  She  continued studying secretarial skills at Pitman’s College, Brixton Hill.

In 1944, Whitfield graduated from theRoyal Acadamy of Dramatic Art with a diploma. 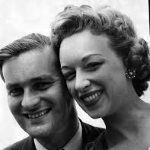 In 1955, she married surveyor Timothy John Aitchison.  Four years after, on 4th June 1960, the couple had a daughter, Suzy, who following in her Mother’s footsteps became an actress.  Timothy Aitchison died in 2001.

During her lifetime June Whitfield received many honours.

Finally in 2017, she was made a Dame Commander of the Order of the British Empire (DBE) for services or services to drama and entertainment.

Now Dame June Whitfield it would be the same year she announced that she was now living in a care home.

June Whitfield began her career in the 1940’s with Wilfred Pickles and worked on stage in the West End and the regions.

In 1951, she had her first credited television role in The Passing Show (billed as a musical revue) and joined the London cast of the musical South Pacific.

Her big break came in 1953 when she replaced Joy Nichols in the hugely successful radio comedy Take It From Here, starring  alongside Jimmy Edwards and Dick Bentley .  Whitfield played Eth in the portion of the show known as “The Glums.”

During the next fifteen years she went onto have many supporting roles on television’s biggest shows, including: Dixon Of Dock Green, Arthur’s Treasured Volumes, The Arthur Askey Show, and Frankie Howerd.  She played the nurse in the opening scene of  Tony Hancock’s most famous episode The Blood Donor.

In 1959 Whitfield made the first of five appearences in another legendary comedy series: The Carry On films.  Starring in Carry On Nurse, Carry On Camping, Carry On Abroad , Carry On Girls and Carry On Columbus.

Her first starring TV role came in 1966 with the sitcom Beggar My Neighbour, playing Rose Garvey.

It was 1968, a year after Beggar My Neighbour finished, she began a working relationship with Terry Scott after appearing on the series Scott On..for six years until 1974.  They would work together on many shows until 1987.

Whilst appearing in Scott On... she had also popped up in The Best Things In Life, The Goodies, The Dick Emery Show, Bless This House and The Pallisers.  As well as an appearence in the TV series June Whitfield starred alongside Terry Scott in the spin-off film of Bless This House (1972), with Scott as her husband.

In 1974 June Whitfield starred alongside Terry Scott in a Comedy Playhouse episode entitled Happy Ever After.  Later that year the first of five series began and it continued for five series until 1979.

It was later the same year, they appeared together again in the first series of Terry and June.  The two shows were very similar, with only a change of surname, from Fletcher to Medford, and a new house and family.  Terry and June ran until 1987.  During the eight-year run of Terry and June she also made gust apearences in It Ain’t Half Hot Mum and Minder.

June Whitfield appeared in a 1988 episode of French and Saunders.  This lead to her starring alongside Jenifer Saunders and Joanna Lumley in another hit sitcom, Absolutely Fabulous that ran from 1992 to 2000 as well as the 2016 big screen version.

In 2005 she joined the cast of another legendary sitcom Last Of The Summer Wine and stayed until it’s end in 2010.